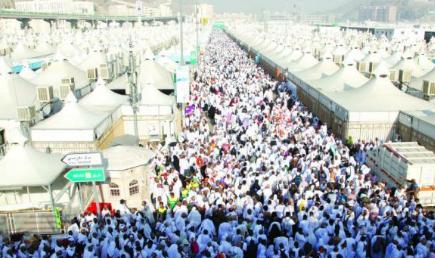 More than 1.3 million foreign pilgrims are expected to perform Haj this year, according to the Haj Ministry. South Asian countries will send the largest contingent of 410,000 Hajis followed by Arab countries with 250,000.
About 228,000 pilgrims will come from Southeast Asian countries including Indonesia and Malaysia, while Turkey and European countries will send 190,000, non-Arab African countries 170,000 and Iran 63,000.
Saad Al-Qurashi, a member of the National Haj & Umrah Committee, said about 150,000 domestic pilgrims, including expatriates, would perform Haj this year. “Among them 41,000 will benefit from low-cost Haj services,” he told Arab News.
The Tawafa Organization for South Asia, which takes care of pilgrims from India, Pakistan and Bangladesh, held a high-level meeting two days ago to review preparations for the annual pilgrimage.
Raafat Badr, chairman of the organization, urged heads of 115 field service groups to extend the best possible services to the guests of God to help them perform their religious duties in comfort.
The Haj Ministry, meanwhile, refuted reports that the government would take the assistance of foreign security companies to manage the annual pilgrimage, the largest gathering of Muslims in the world.
“These are just rumors. There is no need to take the assistance of foreign security companies as reported by some media,” an Interior Ministry source told Asharq Al-Awsat Arabic daily.
A Haj Ministry official emphasized that the Kingdom would employ only Saudi companies to manage Haj affairs.
“All companies we deal with during the Haj season are 100 percent Saudi,” said Hatim Qadi, deputy Haj minister, adding that companies that provide security services are licensed by the Interior Ministry.
Some foreign media reports claimed that the Haj Ministry was planning to appoint a company that cooperates with Israel to provide some services. The report was referring to Al-Majal, which is a Saudi company licensed by the Saudi Commerce Ministry 33 years ago, the Arabic daily said.
Mohammed Al-Othaim, a media expert, said such false reports were aimed at tarnishing the Kingdom’s image and create confusion among pilgrims. “They spread these false information through the social media including Facebook and Twitter using fake names,” he pointed out.