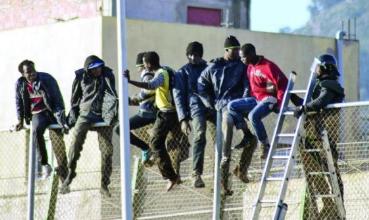 More than 100 migrants on Tuesday managed to scale the six-meter fence surrounding the Spanish exclave of Melilla to enter the territory while around 40 remained perched on the barrier, officials said.
Some 200 people tried to storm into the territory that lies in northern Morocco — which together with the nearby exclave of Ceuta have Europe’s only land borders with Africa — in the early morning hours, Melilla police said in a statement.
“In total, 102 managed to enter Melilla” and 40 remained on top of the fence under the watchful eyes of Spanish border guards, it said.
The flow of migrants hoping to reach Europe via Ceuta and Melilla has swelled this year by the conflicts in Syria and Iraq as well as unrest in parts of north Africa, officials say.
The number of undocumented migrants entering Melilla had surged to more than 4,600 in early December, compared with 3,000 for the whole of 2013, Spain’s interior minister said on December 10.
Rights groups and the UN refugee agency have accused Spanish forces of violence toward migrants climbing the border fences into Ceuta and Melilla over recent months.