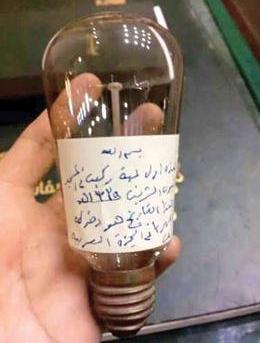 The social media is abuzz with a photo of an electric bulb used in the Holy Mosque in Madinah in 1325H, more than 100 years ago.
According to information inscribed on the bulb, the date of its installation was the same date when electricity entered the Arabian Peninsula, about 112 years ago.
According a Madinah Municipality website, the mosque’s construction and its expansion during the era of Ottoman ruler Sultan Abdul Majid took place between 1265 and 1277H. Oil lamps were used at that time. Electricity was introduced by Sultan Abdul Majid and the electric bulb was lit inside the Holy Mosque of Madinah for the first time on Shaban 25, 1326H.
The expansion work during King Abdul Aziz’s times took place between 1370H and 1375H. During this period, a special power station was established for lighting the Holy Mosque of Madinah when the number of bulbs or lamps reached 2,427.
Mohammad Al-Sayyid Al-Wakeel wrote in his book, “The Holy Mosque of Madinah,” that the mosque was originally lit by palm fronds. When Tameem Al-Dari came from Palestine in 9H, he changed to oil lamps as was narrated by Abu Nuaim referring to Abu Hurairah who said that the one who first lit a lamp in the mosque was Tameem Al-Dari.
Some historians say that the one who first lit lamps in the mosque was Caliph Omar bin Al-Khattab when people gathered there for Taraweeh prayer. The lamps were then lit by oil.