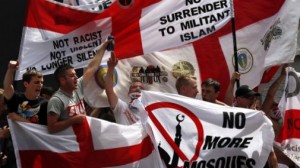 A petition of 10,000 signatures, calling for the Home Secretary to ban the English Defence League’s plans to march in Tower Hamlets in east London on Saturday, has been handed to the Home Office today.

Representatives including the Tower Hamlets Inter-faith Forum, London Muslim Centre and United East End submitted the petition, which highlighted concerns that the march could spread a message of hate throughout the borough. It also outlined concerns that the Metropolitan Police would restrict the EDL’s plans, rather than ban the march planned on Saturday 7 September 2013.

Lutfur Rahman, executive Mayor of Tower Hamlets, said: “While we welcome the Metropolitan Police’s decision to place conditions on the EDL’s intended march and rally this Saturday, we are still urging the Home Secretary to ban the march altogether. Allowing it to go ahead risks community cohesion, could result in disorder, threaten public safety and risks the threat of violence to property, police personnel and the local community.

“Over 10,000 local people have signed a petition calling for the march to be banned, joining politicians, faith leaders and community groups in voicing their concerns about the EDL’s desire to march through our streets, spreading their message of hate.

“Tower Hamlets is no place for hate and it’s high time the Home Secretary listened to the concerns of our community – we need her to act now.”