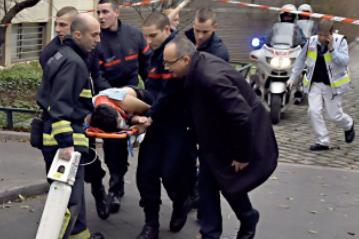 Heavily armed gunmen massacred 12 people on Wednesday after bursting into the Paris offices of a satirical weekly that had long outraged Muslims with blasphemous cartoons.
The late-morning attack on the Charlie Hebdo headquarters in a quiet neighbourhood was the bloodiest in France for at least four decades.
Victims included three cartoonists and the chief editor who had been holding a morning meeting when the assailants armed with Kalashnikovs opened fire, officials said.
Police said witnesses heard the attackers shout “we have avenged the Prophet” and “Allahu akbar” (God is greatest).
President Francois Hollande immediately rushed to the scene of what he called “an act of exceptional barbarism.”
Large numbers of police and ambulances rushed to the scene, where shocked residents spilled into the streets. Reporters saw bullet-riddled windows and people being carried out on stretchers.
The gunmen remained at large by early evening and there was no claim of responsibility. The interior minister said three assailants took part.
Editor-in-chief Stephane Charbonnier, known as Charb and who had lived under police protection after receiving death threats, was among those killed in Wednesday’s attack.
Others left dead included the cartoonists known as Cabu, Tignous and Wolinski.
Two police were confirmed among the dead and four people were critically injured.
The paper’s last tweet on Wednesday morning before the attack included a cartoon of ISIS group leader Abu Bakr Al Baghdadi and Happy New Year wishes.
This week’s front page featured controversial author French Michel Houellebecq, whose latest book “Soumission”, or “Submission”, which imagines a France in the near future that is ruled by an Islamic government, came out on Wednesday.