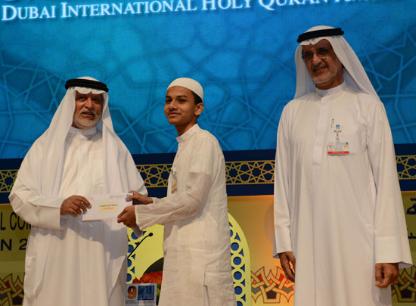 The auditorium of Dubai Chamber of Commerce and Industry was thronged by people from all nationalities, who came to enjoy the tuneful recitation of top Quran memorisers on Sunday night.
The Dubai International Holy Quran Award on Sunday night honoured the top five memorisers with the most beautiful voices, with 12-year-old Mohammed Jakareya from Bangladesh bagging the first position.
The top five were respectively gifted with special prize money of Dh5,000, Dh4,000, Dh2,000, Dh2,000, and Dh1,000.
After Jakareya, the other memorisers who won the other top four positions were Wedou Ahmed Aghrabatt, 13, Mauritania; Mohammad Behzadfar, 14, Iran; Abas Ahmad, 19, Tanzania; and Hamzah Elhabashy, 14, USA.
The remaining seven positions — 6th to 12th — were taken by Niyitunga Zaidi, 9, Burundi; Harouna Mamadou, 19, Niger; Zeyad Tawaelba, 20, Jordan; Rashid Ali Khalfan Al Naqbi, 21, UAE; Soibahoudine Ahamada, 19, Comoros Islands; Bilal Chamssi, 14, Morocco; and Abdalrahman Ashraf Elsayed, 17, Egypt.
Ibrahim Mohammed Bu Melha, Head of the Award Organising Committee and Adviser to the Ruler of Dubai for Cultural and Humanitarian Affairs, said up to 83 contestants — with 16 Arabs, 17 Asian, 34 Africans, 14 Europeans, and three North and South Americans — registered in the award this year.
“However, seven were disqualified and four did not show up and only 72 qualified for the final examinations.”
Noting, he said the appreciation certificates for the top ten participants of the Quran award, designed and decorated by an international professional artists, will be signed by His Highness Shaikh Mohammed bin Rashid Al Maktoum, Vice-President and Prime Minister of the UAE and Ruler of Dubai, the first supporter and main sponsor of the award.
“The organising committee of the award has also prepared a special book on Shaikha Fatima bint Mubarak, who has been named the Islamic Personality of the year this edition. The publication, to be distributed during the concluding ceremony, spans full details on her biography, achievements, philanthropic activities, rewards, honours, and badges.”
However, the top ten contestants of the main Quran memorisation competition — to be announced tonight — and the Islamic Personality of the year award will be given in the concluding ceremony tonight.
Bu Melha said the 18-day award competition saw a rich cultural programme of 22 lectures in Arabic, Bengali, Malayalam, and Tamil, apart from a tough competition among Quran memorisers from 72 countries.
“Big prizes up to Dh950,000 await the top ten Quran memorisers. The top ranker (first prize) will get Dh250,000 while the second will get Dh200,000, and the third Dh150,000. Winners from the fourth to the tenth will be gifted Dh65,000 – with the prize money getting reduced by Dh5,000 from the fourth to the tenth position in ascending order,” Bu Melha said.
The rest of the participants shall be awarded as per their performance, he added. “Bonus of Dh30,000 will be given to each of those who score 80 per cent and above and Dh25,000 to competitors with 70 to 79 per cent.”