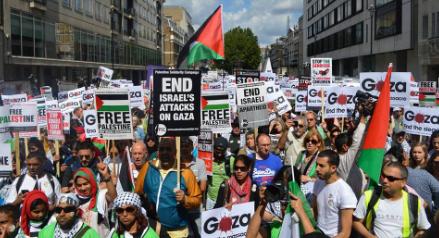 David Cameron’s failure to condemn Israel’s massacre in Gaza was attacked by MPs and other speakers today at a mass rally in London’s Hyde Park in support of the Palestinians. Speakers also called for sanctions and an arms embargo on Israel.
More than 150,000 people marched from the BBC studios in Portland Place, past the US embassy in Grosvenor Square to Hyde Park, in a protest called by Palestine Solidairty Campaign and other organisations.
It was the third mass march through London in support of Gaza in three weeks. It was also the biggest, and formed part of a global Day of Rage, with people marching in cities across the globe to show solidarity with Gaza under attack.
Coaches carried protesters to London from as far afield as Scotland, while other towns and cities in the UK also held their own protests and vigils for the Palestinians.
Quotes from speakers in Hyde Park: 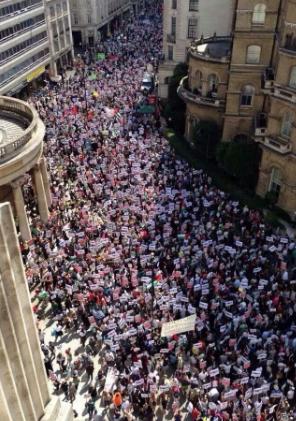 Sarah Colborne, Director of Palestine Solidarity Campaign: “We are here to send a message to our government that we are ashamed, we are sick and we are disgusted at the massacre in Gaza and the British government’s complicity. There are people from different political parties and every section of society, people of all faiths and people of none, who say ‘sanctions now, free Palestine’.”
Rushanara Ali, MP for Bethnal Green and Bow (Labour): “I have a message for Mr Cameron. He has failed to show courage, he has failed to show leadership, he is a disgrace to our country. He is a disgrace because he has failed to speak up against injustice, because he has failed to do anything about the sale of arms that can be used, and are being used, by Israel to kill and suppress. Britian deserves a Prime Minister who speaks the truth and challenges injustice, not just in Gaza, but in the West Bank. Let’s pledge today to keep up the pressure on this dreadful government to stop the violence.”
Tariq Ali, writer and journalist: “There is a basic point that has to be made to our politicians. They have to understand that there is no equivalence betweeen the Palestinian resistance and the Israeli occupation. When a country is occupied, resistance emerges. If you want no rockets being fired, no tunnels being dug, get out of Gaza.”
Diane Abbott, MP for Hackney North and Stoke Newington (Labour): “British people of all colours and all political parties stand in solidarity with the people of Gaza. This is the best demonstration yet in support of Gaza and David Cameron needs to know that we will keep up the pressure until he takes a stand that is morally defensible.”

Glyn Secker, Jews for Justice for Palestinians: “Today, an image remains in my mind. It is the image of a Palestinian father carrying the flesh of his son in a plastic bag. As a Jew, I will not ever be associated with these monstrosities. Never in my name, never in my life, never in my children’s life.”
Seamus Milne, Guardian columnist and associate editor: “Israel is in illegal occupation of Gaza, the West Bank and East Jerusalem. Israel has no right to defend itself from territories it occupies. It only has an obligation to withdraw. The Palestinians are an occupied people. They have a right to defend themselves from the occupier.” 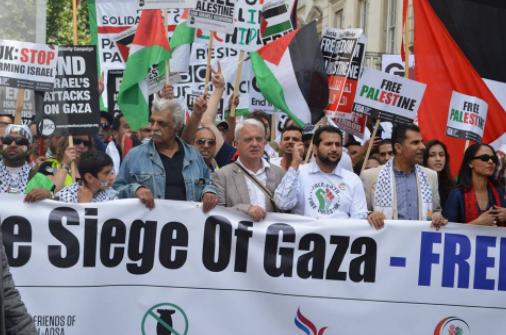