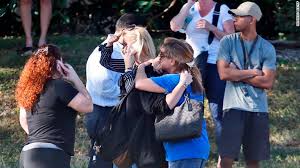 At least 17 people were killed Wednesday when a lone gunman opened fire in a Florida high school, according to police. The victims are a mix of students and adults, officials said.
Twelve victims were slain inside Stoneman Douglas High School in Parkland, Florida, two others were killed outside the school, one was killed on the street and two died in a local hospital. Some of the victims are undergoing surgery, Broward Sheriff Scott Israel told reporters.
“It’s a horrific, horrific day,” Israel said.
In total, 17 people were sent to local hospitals for gunshot wounds, according to Doctor Evan Boyar. Three patients are undergoing surgery and are in stable condition. Three others are in critical condition.
Israel identified the shooter as 19-year-old Nikolaus Cruz, a former Stoneman Douglas student who Israel said was expelled for disciplinary reasons.
Cruz was arrested off-campus without incident. The suspect used an AR-type rifle and had multiple ammunition magazines in his possession, according to Israel.
People are being advised to avoid the area as the scene is still active. Footage appearing on television and social media depicts students being escorted out of the high school in small groups amid a heavy police presence.
Connecticut Senator Chris Murphy took to the Senate floor as the tragedy unfolded to slam congressional inaction on gun control.
“This happens nowhere else, other than the United States of America; this epidemic of mass slaughter; this scourge of school shooting after school shooting,” he said. “It only happens here. Not because of coincidence, not because of bad luck, but as a consequence of our inaction. We are responsible for a level of mass atrocity that happens in this country with zero parallel anywhere else.”
President Donald Trump phoned Florida Governor Rick Scott to offer federal assistance if it is needed, the White House said in a statement.
Department of Homeland Security Secretary Kirstjen Nielsen also phoned Scott as well as other state and local officials, the White House said.
Florida Congresswoman Frederica Wilson called the shooting “heartbreaking” on Twitter, sending her thoughts and prayers to the victims.
“It is heartbreaking that these violent incidents continue to take place in schools, a place where our children should feel and be the most safe!” she added.