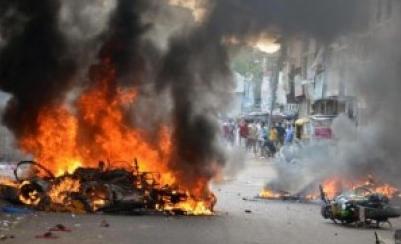 Police in India’s eastern state of Bihar have arrested eight people on Monday in connection with the deaths of three Muslims who were reportedly burnt to death, according to local media.
Violence erupted in the predominantly Muslim village of Azizpur, in the district of Muzaffarpur, on Sunday when angry villagers torched more than a dozen huts belonging to Muslims, reported local daily The Hindu.
The attack was reportedly sparked by the discovery of the dead body of a 19-year old Hindu youth, who had been missing for more than a week after an alleged love affair with a Muslim girl.
Most of the villagers ran away on Sunday fearing backlash. The state government has announced a compensation of $8,100 for each of the families of those killed in the violence.