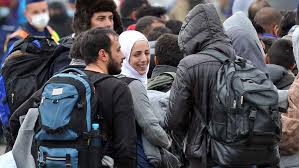 Germany estimates that 30 per cent of incoming migrants claiming to be citizens of war-torn Syria are in fact from other countries, an interior ministry spokesman said on Friday.
“It’s an estimate based on the observations of officials on the ground, especially the federal police, the Office for Migration and Refugees and (EU border protection agency) Frontex,” he said.
The spokesman stressed that Germany keeps no official statistics on asylum-seekers believed to be misstating their nationality.
Interior Minister Thomas de Maiziere later said that “we’re seeing fake Syrian passports, and there are signs of people claiming to be from Syria who don’t speak a word of Arabic.”
Germany is Europe’s top destination for people fleeing war and misery amid Europe’s greatest migrant influx since World War II and expects between 800,000 and one million newcomers this year.
Numbers have surged since Germany declared it would admit Syrians, even if they technically should have applied for refugee status in the first EU country they set foot in on their way to Germany.
A market in fake Syrian passports has sprung up, particularly in Turkey, to help migrants and refugees enter the EU, the head of Frontex, Fabrice Leggeri, said earlier this month.
Meanwhile, Croatia under EU pressure on Friday removed its border restrictions with Serbia, which it had introduced over the migrant crisis, Interior Minister Ranko Ostojic said on the government’s Twitter account.
“The border was unblocked at 5pm (1500 GMT). All cars, regardless of their registration plates … can now enter Croatia,” Ostojic said.