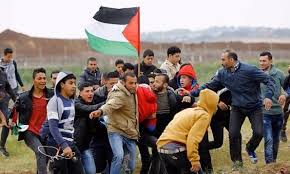 At least 37 Palestinians were killed and hundreds injured on Monday by Israeli gunfire during anti-occupation rallies in the Gaza Strip, according to the Health Ministry.
“The death toll rose to 37 killed and 1,639 others injured” by Israeli forces, ministry spokesman Ashraf al-Qidra said in a statement.
He said a minor was among those killed during the protests.
According to the spokesman, 11 Palestinians were “seriously injured” during the protests.
He said nine journalists and a medic were injured during the demonstrations.
Another Palestinian, Mosaab Abu Leila, 29, was shot dead east of Jabalia city in the northern Gaza Strip, he said.
Seven more Palestinian youths were killed by Israeli gunfire during rallies near Gaza border, the spokesman said.
Thousands of Palestinians have gathered on Gaza Strip’s eastern border since early morning to take part in protests aimed to commemorate the Nakba anniversary and protest relocating the U.S. Embassy from Tel Aviv to Jerusalem.
The rallies will culminate on Tuesday, May 15, the 70th anniversary of Israel’s establishment — an event Palestinians refer to as the “Nakba” or “the Catastrophe”.
Since the rallies began on March 30, at least 49 Palestinian demonstrators have been killed and hundreds injured, according to Health Ministry figures.
Last week, the Israeli government said that rallies are a part of state of war and human rights laws are not applicable in such case.