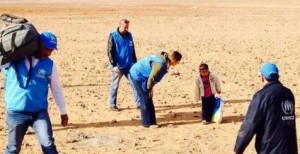 For Jordan-based UN relief worker Andrew Harper, seeing people cross the Syrian desert into Jordan seeking refuge from the Syrian civil war is an every day occurance.
However, he was shocked to see a four-year-old boy by the name of Marwan crossing the desert alone as he approached the remote Hagallat crossing.
Marwan was one of many children who lose their parents in the chaos of the migration, especially when desperate refugees surge to get through the gates, but they are shortly reunited with their parents.
This particular young boy however, had lost his parents before they even got any where near to the border. So, with just one small plastic bag of belongings in his hand, this brave four-year-old decided to cross the desert alone on-foot.
When Harper spotted the child, he took a picture and shared it on his Twitter account to highlight the tragedy that occurs at the border on a daily basis. The picture has since gone viral.
Marwan was just one of about 1,000 refugees, mainly from Homs, who crossed the border that day.
Shortly after the picture was taken, Marwan was reunited with his family.