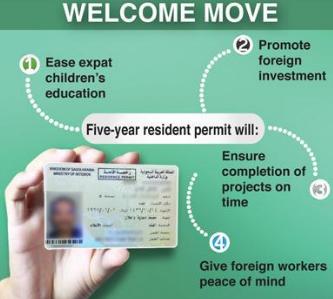 Foreign investors and guest workers have welcomed the government’s reported plan to issue resident permits (iqamas) for five years instead of one. They said the move would boost the Kingdom’s economic progress.
“This is a great step on the part of the government and will have a tremendous impact on businesses,” said Siddeek Ahmed, CMD of Eram Group while responding to the Passport Department’s plan to implement a proposal to extend the iqama validity from one to five years.
Maj. Gen. Sulaiman Al-Yahya, director general of the Passport Department, said there is a plan to change the name of iqama to resident ID and extend its validity up to five years.
Speaking to reporters in Riyadh on Sunday, he emphasized that the proposal would be implemented shortly.
He said the department was also studying a proposal to extend the validity of Saudi passport to 10 years.
Arab News contacted Col. Mohammed Al-Hussain, spokesman of the department in the Makkah region, to know when the five-year iqama would be implemented, but he said he did not have any more details.
However, informed sources said the proposal would be implemented soon after its endorsement by Interior Minister Prince Mohammed bin Naif.
Al-Yahya’s statement was widely applauded. “The extension of iqama to five years will provide job security to expatriates. It will also help contracting companies to complete their projects on time,” said Siddeek Ahmed.
He said the move would encourage foreign companies to invest in the Kingdom and transfer their technology without any fear as it guarantees the availability of qualified and skilled foreign workers for five years.
“I am very happy,” said Mohammed Ali, managing director of Jeddah National Hospital.
“This is good not only for expats but also for the Kingdom,” he said, adding that it would encourage experienced guest workers to stay in the Kingdom instead of going to Europe, America and Australia in search of better job opportunities.
He said the five-year iqama program would help expats to make long-term plans. “One-year iqama was creating uncertainty. Doctors and paramedics were unwilling to come to the Kingdom,” he said.
Salah Karadan, former chairman of International Indian School Jeddah’s managing committee, said the move would help expat children to stay long abroad for higher education.
“In the past, many parents had to cancel children’s iqamas as the latter could not come to the Kingdom for renewing iqamas because of exams and other reasons,” he pointed out. “The new move will motivate expats and increase their productivity.”