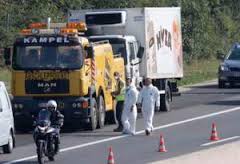 Up to 50 refugees have been found dead in a truck in Austria. This happened the day German Chancellor Angela Merkel and Balkan leaders gathered in Vienna to decide on how to tackle together the biggest migration crisis to hit Europe since World War II.
The Krone newspaper reported on Thursday that those on the truck may have suffocated.
The vehicle, which contained up to 50 bodies, was found on a parking strip off the highway in Burgenland state, police spokesman Hans Peter Doskozil said at a press conference.
More than 28,300 people applied for refugee protection in Austria in the first half of the year, with many coming from Syria.
The talks in Vienna on Thursday come a day after Merkel vowed zero tolerance for “vile” anti-migrant violence in Germany, and amid growing criticism of the European Union’s failure to agree a joint response.
Countries taking part include Macedonia and Serbia, two major transit nations for the thousands of migrants and refugees trying to enter the EU by taking the so-called “western Balkans route”.
The foreign ministers of both countries called for a concerted EU action plan at the start of the summit. -Al-Jazeera