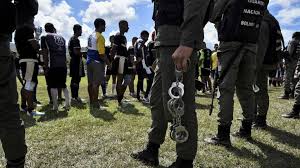 At least 52 people were killed in a jail in northern Brazil on Monday as rival gang factions fought each other, an official said. It was the latest violence to rock the country’s overpopulated and deadly prison system. Sixteen of the dead were decapitated in the hours-long clashes that ended around midday, an official from the Para state government’s penitentiary department told AFP.