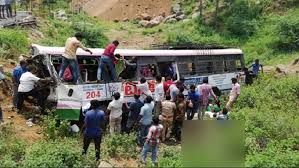 Fifty-two people were killed and several were injured after a state-owned Road Transport Corporation bus carrying pilgrims from a temple in the hills of Telangana’s Jagtiyal district plunged off a road this morning, officials said.

The bus with at least 60 people on board was returning from the popular Anjaneya Swamy temple in Kondagattu to Jagtial when the accident occurred near Shanivarapet village. Police suspect failure of brakes on the crowded road leading to the temple led to the accident. The driver, who also died in the accident, reportedly lost control as he tried to avoid another bus on the route.

Authorities recovered bodies of five children, 32 females and 15 males before calling off the rescue operation. The injured are being shifted to Jagitial government hospital, police said. The toll could go up as the condition of some of the injured was stated to be critical.

While locals were quick to step in for rescue and relief, Jagitial collector Sharath and other top officials also rushed to the accident spot along with the rescue teams.

Telangana chief minister K Chandrashekhar Rao expressed shock over the accident and conveyed his condolences. He directed officials to provide immediate medical assistance to the injured.

He also announced an ex gratia of Rs 5 lakh each to the families of those killed.