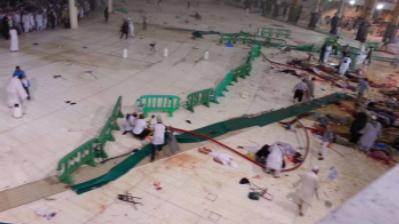 107 people have been killed and 238 wounded in Makkah’s Grand Mosque after a crane collapsed on Friday, Al Arabiya News Channel reported citing the Saudi Civil Defense authority. It is believed the crane collapsed in high winds.
Pictures circulating on social media showed pilgrims in bloodied robes and masses of debris from a part of the crane that seemed to have crashed through a ceiling.
The incident occurred as hundreds of thousands of Muslims are due to gather from around the world for the annual hajj pilgrimage set to begin later this month.
The nationalities of the dead and injured pilgrims are yet to be announced. Consuls General of India, Pakistan and Bangladesh told Saudi Gazette that so far there were no confirmed reports of death among their pilgrims. Pakistan Consul General Aftab A. Khokher said that around 15 Pakistani pilgrims were injured and they have been admitted to two hospitals in Makkah.
Indian Consul General B.S. Mubarak said 10 Indian pilgrims were injured in the accident. About 25 Bangladesh pilgrims sustained injuries and their condition is stable, according to A.K.M. Shahidul Karim, consul general of Bangladesh.
Ahmad Al-Mansouri, spokesman of the Presidency for the Affairs of the Two Holy Mosques, said the tragedy occurred at 5.10 p.m. due to strong winds and heavy rain, causing a part of the crane to smash into the part of the Grand Mosque where worshippers circumambulate the Holy Kaaba (mataf) and where pilgrims walk between Mount Safa and Marwa (mas’a).
“At least 107 people were dead and another 238 were injured,” he said.
Al-Mansouri said Crown Prince Muhammad Bin Naif, deputy premier, minister of interior and chairman of the Supreme Haj Committee, and Prince Khaled Al-Faisal, chairman of the Central Haj Committee, are closely following up on the accident from the moment of its happening. The presidency expressed deep sorrow over the tragedy and conveyed its deep condolences to the Saudi leadership and the family members of the dead. It prayed for the speedy recovery of those sustaining injuries.
A video on YouTube showed people screaming and scurrying around right after a massive crash was heard and as fog engulfed the city. The crashed crane is regarded as one of the largest cranes used in the Middle East region.
The largest ever expansion in the history of the Grand Mosque is in its final phase when the accident occurred. The project will expand the area of the mosque by 400,000 square meters, allowing it to accommodate up to 2.2 million people at once. All the finished parts of the mataf were opened for pilgrims for Friday prayers on the day of the accident.
Meanwhile, Saudi Binladin Group, which is implementing the Haram expansion project, announced halting of all the construction works. Muhammad Muneeb Agha, deputy executive director general, said that the last working day at the project site was Thursday, Sept. 10. “As per the directive from Nawaf Bakr Binladin, only those works such as cleaning, removal of debris, and emergency and safety works would continue at the expansion site,” he said.