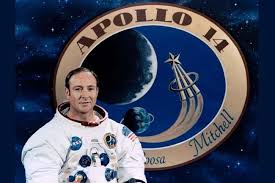 Apollo 14 astronaut Edgar Mitchell, who became the sixth man on the moon when he and Alan Shepard helped NASA recover from Apollo 13’s “successful failure” and later devoted his life to exploring the mind, physics and unexplained phenomena such as psychics and aliens, has died in Florida. He was 85.
Mitchell died Thursday night at a West Palm Beach hospice after a short illness, his daughter, Kimberly Mitchell, said. Mitchell’s passing coincides with the 45th anniversary of the Apollo 14 mission, which ran from Jan. 31-Feb. 9, 1971.
Mitchell, one of only 12 humans to set foot on the moon, was not a typical strait-laced astronaut: In later years, he said aliens visited Earth and faith healers were legit. He attempted to communicate telepathically with friends at home during his Apollo mission. He had an “epiphany” in space that focused him on studying consciousness, physics and other mysteries.
“What I experienced during that three-day trip home was nothing short of an overwhelming sense of universal connectedness,” Mitchell wrote in his 1996 autobiography. “It occurred to me that the molecules of my body and the molecules of the spacecraft itself were manufactured long ago in the furnace of one of the ancient stars that burned in the heavens about me.”
His passion for exploration led him to become an astronaut, and he joined NASA in 1966. He helped design and test the lunar modules that first reached the moon in 1969 with Neil Armstrong and Buzz Aldrin.
Shepard, the first American in space in 1961, picked Mitchell to be on Apollo 13’s three-person crew. But they were bumped to the next mission so Shepard would have more time to train — he had been grounded for years because of an inner ear disorder.
The delay was an unexpected benefit: Apollo 13’s astronauts were nearly killed when an oxygen tank exploded as they neared the moon in 1970. They made it home safely, but never set foot on the moon. A year later, Shepard, Mitchell and Stu Roosa were the first crew to try again amid falling support for the moon missions from President Nixon, Congress and the public.
“Had we blown it, had it failed for whatever reason, that would probably have been the end of the Apollo program right there,” Mitchell said in 1997. But they didn’t let that get to them: “When you’re carrying that personal load, you just don’t have room to carry a national load as well.”
Fortunately, their mission, the third lunar landing and Mitchell’s only trip in space, was a success.