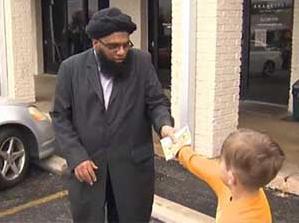 A 7-year-old boy donated all the money in his piggy bank to a Texas mosque that was vandalised in what police are saying is a hate crime.
The Islamic Center of Pflugerville was hit by a vandal who left torn pages of the Qur’an smeared with feces outside the entrance, police said. The vandalism was found early Monday morning by a congregant.
The young donor, Jack Swanson, went to the mosque that afternoon and handed over his money — $20 that had originally been collected in the form of pennies over time, according to Faisal Naeem, one of the mosque’s board members.
“Jack’s $20 are worth $20 million to us because it’s the thought that counts,” Naeem told ABC News today. “Jack is just a little older than my son, Ibrahim. If we have more kind-hearted kids like them in the world, I have hope for our future.”
Although no physical damage was made to the facility, clean-up costs were estimated to be about $150, a mosque member told police.
Jack’s mother, Laura Swanson, told ABC affiliate KVUE that she wanted to support the mosque and show that “what happened in Paris is not what’s happening in Pflugerville.”
Naeem added that he didn’t want to assume the vandalism was motivated by news of the Paris terror attacks until police conclude their investigation.
When the local Muslim community learned of Jack’s generosity, they decided to surprise Jack with a gift.
They sent him an Apple iPad which he had been saving up for with a message saying:
“Dear Jack,
You had saved $20 in your piggybank for an Apple iPad. But then a local Islamic mosque was vandalized. So you donated your $20 to this local Texas mosque instead. Because of your amazing generosity & kind heart…Please enjoy this Apple iPad with our sincere thanks 🙂
Love
The American Muslim Community :)”
Naeem said he was frustrated with the “generalisations” often applied to the Muslim community after terrorist attacks.
“It’s become so commonplace where something goes wrong somewhere and people want to blame all Muslims,” he said. “If anything, it’s a pointing indictment of the logical fallacy in our society’s way of thinking.”
Nonetheless, Naeem said the mosque remains encouraged by the local community’s outpouring of support since the vandalism.