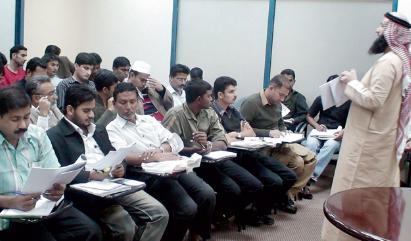 Ahmed Shaaban: Dubai has not only become a leading business hub in the region but rather a major attraction for new Muslims who favour the cosmopolitan and tolerant city for residence and work.
Official statistics show that the Department of Islamic Affairs and Charitable Activities in Dubai has seen the conversion of 760 people of 75 nationalities into Islam so far this year.
A senior official said more and more people are getting attracted to Islam and that 2,269 residents became embraced Islam in 2013.
Huda Alkaabi, Head of the New Muslims Section at the department, said the new Muslims converted on their own free will basically due to the tolerant and merciful treatment they receive in the country from Muslims.  “Islam is a peaceful religion which never discriminates people because of their colour, language, race or religion.”
Adding, she said the department provides new Muslims with all facilities needed to help them truly embrace Islam, officially authenticate their conversion, and reply to all their queries about the teachings of the new religion.
“They are also equipped with all possible publications, CDs, cassettes, and booklets on Islam in different languages and in an easy, attractive and persuasive way.”
Alkaabi said they are ready to answer all queries about Islam. “Should anyone be interested in embracing Islam…, they have to fill in a special form, and submit certain documents, such as a passport copy, a valid residence permit, and a photograph to officially authenticate their conversion.”
Introductory lectures and courses are then prepared for new Muslims to help them understand the teachings of Islam.
“They are also provided with brochures and simplified booklets on Islam in their own languages.”
Alkaabi said non-Muslims also have a good chance to meet new Muslims and listen to many conversion stories from their compatriots in their own languages. “People are touched by the merciful instructions of Islam which orders its followers to be honest, fair and kind to all people.”
Rashid Aljunaibi, Director of the Islamic Information Centre of the Dubai government-run Dar Al Ber Society, said the Dubai International Peace Convention saw the conversion of over 250 people. “Our staff scholars and preachers have helped 48 people of these to convert to Islam during the three-day event.”