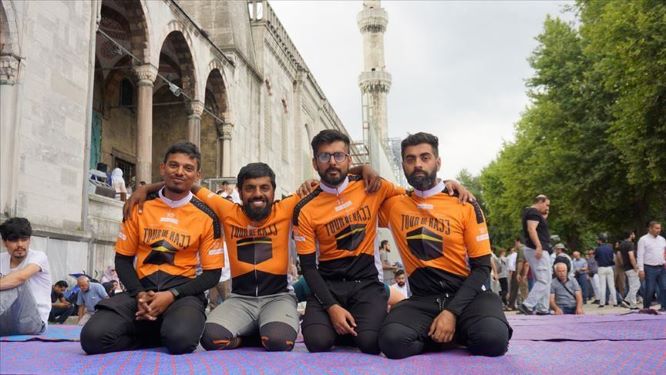 A group of eight British Muslim cyclists arrived in Istanbul on Saturday for a break in their long hajj trip from London to the Muslim second-most sacred city of Madinah.

“This journey is important in many ways. We’re all on the road for our faith. We meet great people along the road and we have great stories,” Zain Lambat, a member of the group, said about his first journey to Hajj.

“Thank goodness we had a great time as we made our way to places.”

The group, who call themselves the “Tour de Hajj”, kicked off their journey on June 7 and is expected to take 60 days.

They plan to pedal through 17 different countries, with only a break to cross Syria and Iraq to reach Egypt by plane.

They aim at raising awareness and funds for needy Muslims across the world for building mosques and schools.

Afzal also said he recommends making a pilgrimage by bike, adding: “It’s about your will. … In the Holy Qur’an, it says, ‘When he [God] wishes for something to exist, he just commands it to exist, so it does.’ That’s how people should look at life.”

Lambat is thankful to the Turkish people who welcomed them warmly to the city of Istanbul.

“Everywhere we went, there were Turkish mosques, and we met our Turkish brothers. They showed us incredible hospitality.”

“If you have a really good intention to make a pilgrimage, God will surely make your way easier,” Lambat said.

“We set off with a very small budget, but God introduced to wonderful people along the way and provided our sustenance.”