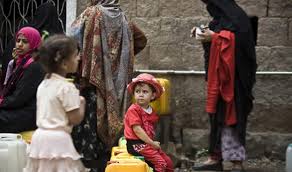 Eighty percent of Yemen’s population, or more than 20 million people, need some form of humanitarian assistance as Arab air strikes and civil war ravage the impoverished country, aid agency UNICEF said on Thursday.
The figure is up by almost 5 million people since the organization’s latest report last week.
For over 11 weeks, an Arab military coalition has been bombing the Houthi militia, the dominant group in Yemen at the moment, in a bid to restore the country’s exiled president to power and support local fighters resisting the Houthi advance in battlefields nationwide.
The alliance’s de facto blockade of Yemen’s air space and ports has cut off supplies of food and fuel to the parched country, where gas-powered pumps providing water for drinking and sanitation now lie mostly inoperable.
“20.4 million people are now estimated to be in need of some form of humanitarian assistance, of whom 9.3 million are children,” Jeremy Hopkins, Deputy Representative of UNICEF, said from the capital Sanaa.
“The de facto blockade on Yemen’s ports, though there is some easing, means fuel is not coming into the country, and since pumps are mechanized that means over 20 million people don’t have access to safe water,” he added.
Other urgent humanitarian needs, he said, include malnutrition, shortages of medical supplies, mounting civilian casualties in air strikes, recruitment of child soldiers and damage to schools by the warring sides.
Even before the conflict, UNICEF said around 10 million people in Yemen needed humanitarian assistance, a product of decades of underdevelopment in the mountainous and barely governed Arabian Peninsula state.
Mohammed Shabeek fled his house with his wife and three children due to gun battles and worsening sanitation in his home district of Crater in the southern city of Aden.
“The scene around my house is catastrophic. There’s no water, electricity or food. Trash piles up in the street and we’re afraid of disease. Aid agencies need to get to these areas by any means necessary,” he said while seeking refuge in a relative’s house in the city.
A local medical official in the city said dozens of people have died in the city in recent weeks due to a sudden uptick in dengue fever and malaria brought on by the shortage of water and lack of rubbish collection as temperatures soar.