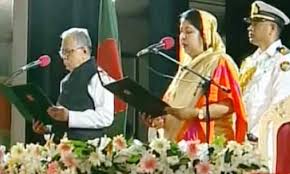 Md Abdul Hamid has been sworn in as President of has been sworn in as President of Bangladesh for the second consecutive term.
Speaker of the Parliament, Dr Shirin Sharmin Chaudhury administered the oath at the Bangabhaban around 7:45pm on Tuesday.
President Abdul Hamid is the first ever president to hold the office for two consecutive terms.
This is his last term in the country’s highest office, as the constitution only allows a maximum of two terms as president.
Back in April 24, 2013, Abdul Hamid was sworn in as the 20th president of Bangladesh.
Since the independence, so far 16 people have been the head of the state for 19 terms.
President Abdul Hamid is the 17th person to serve in the office.