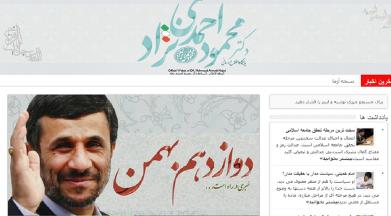 Iran’s hardline former president Mahmoud Ahmadinejad on Sunday launched his official website, in a possible return to the political scene a year before legislative elections.
The site Ahmadinejad.ir, showing Ahmadinejad with a big smile, was launched at the same time as a Google+ page for the two-time former president and an account on Instagram.
The hardline conservative has stayed out of the public eye since his mandate ended in June 2013 and the election of Hassan Rowhani, his moderate successor as president of the Islamic republic.
Last month, Mohammad Reza Rahimi, Iran’s first vice president under Ahmadinejad, was sentenced to five years in prison, state media said.
The supreme court’s verdict came after a long-running trial on what Iranian media said were corruption charges.
Ahmadinejad has said the charges against Rahimi stemmed from before the time he was named vice president.