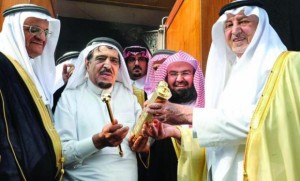 Makkah Gov. Prince Khaled Al-Faisal on Monday handed over the new keys of the Holy Kaaba (House of God) to Sheikh Abdul Qader Al-Shaibi, its chief guardian.
The newly built lock was fixed on the Kaaba following the ceremonial washing of the House of God on Monday under the leadership of Prince Khaled.
The lock and key were made of nickel and polished by 18-carat gold.
The Muslim testimony to faith is written on the front side of the lock and an attribution of donation to Custodian of the Two Holy Mosques on the back.
Inscribed on the sides is: King Abdullah bin Abdul Aziz, 1434H, verse 97 from the Quranic chapter entitled Al-Maida and verse 96 of the chapter entitled Al-Imran.
The Presidency for the Two Holy Mosques’ Affairs supervised the making of the new lock and key at King Abdul Aziz City of Science and Technology in Riyadh.
Sheikh Abdul Rahman Al-Sudais, head of the presidency, thanked the Saudi leadership for its support. The old lock and key would be preserved at the Two Holy Mosques Exhibition, he said.
Prince Khaled, accompanied by top officials, earlier washed the Kaaba using Zamzam water mixed with rose water. He was greeted upon arrival by Sheikh Sudais and his deputy, Sheikh Muhammad Al-Khuzaim. The ceremony was attended by Professor Ekmeleddin Ihsanoglu, Makkah Mayor Osama Al-Bar, Deputy Makkah Gov. Abdul Aziz Al-Khodairy, Deputy Haj Minister Hatim Qadi and several Muslim diplomats.