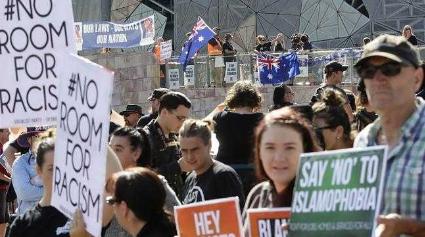 Tempers flared and mounted police intervened as protesters took to the streets to march against a combined force of anti-Islam groups across Australia on Saturday.
Marchers draped in the Australia flag carried signs screaming anti Islam messages such as “Sharia Law equals Pedophilia,” and “God Save Us” in Sydney, while in Perth a line of mounted police and other officers, some with dogs, kept opposing sides apart.
A media release on behalf of Rise Up Australia – a group participating under a “Reclaim Australia” banner – stated that the “grass roots movement” started off with just a few Aussies who “were sick of staying silent while Islam, through Multiculturalism, was slowly but surely taking away all of our rights and freedoms.”
Kuranda Seyit – a spokesperson for the Islamic Council of Victoria – told The Anadolu Agency that the movement’s “Reclaim Australia” slogan made no sense.
“What are they reclaiming,” asked Seyit, who spoke at a pro-Muslim rally in Sydney. “The only thing I can see that’s been lost is their dignity, their moral compass and their self-respect.
“It’s an insult to Australia, which prides itself on its multiculturalism and tolerance,” he added.
Such feelings were shared in a banner carried by a demonstrator which depicted an Aboriginal flag
“Not yours to Reclaim!” it shouted.
Reclaim Australia cite the wearing of the burqa, Islamic extremism and the fear that sharia law is on the rise in Australia as issues of concern.
Counter-protesters argue the movement is anti-Muslim and Islamophobic, while Clare Fester, who organized a counter-rally in Sydney, told The Anadolu Agency that Reclaim is “racist and divisive.”
The movement’s spokesperson Catherine Brennan denied the accusation, telling AA that they are “simply patriotic”.
“We want to return to traditional Australian values,” she said. “We want to go back to the time when we can walk into the Lindt café and not be concerned that we’re going to be blown up or shot,” she said.
From Dec. 15-16 a lone gunman killed two hostages at Lindt during a two-day siege.
Organizers claim over 700 supporters rallied for Reclaim in Sydney, close to 2000 in Melbourne and over 500 on the Gold Coast and in Adelaide. Counter protesters say their numbers were on par.
Brennen told AA that two Reclaim speakers “pulled out because they got death threats,” while reports said four people were arrested in total – three in Melbourne and one in Hobart.
Police shut down the Melbourne rally “for public safety,” according to the movement, mounted officers brought in to separate both sets of protesters.
“Leftists attacked attendees holding flags and were held back by cordon lines and police on horseback. 500 in the rally area and 2000 more unable to get past the left agitators,” the group claimed on its Facebook page.
Islamic Council of Victoria spokesperson Seyit said that the tone of both rallies became more confrontational when police came face to face with protesters.
He said it was clear that they had instructions not to allow the pro-Muslim protesters to get near the Reclaim rally.
“Nobody challenged them,” he stated.
He said that it’s important to keep the anti-Islamic sentiment in Australia in perspective.
“The support base of anti-Islamic groups, trying to stir up trouble, is small. They’re playing on people’s fears and trying to create the impression that Muslims are dangerous and will change the Australian way of life.”
The group is doing nothing more than “fearmongering and exploiting the situation that the Islamic State [Daesh] has created,” he told Anadolu Agen.
Meanwhile, Reclaim Australia’s twitter account was hacked prior to the marches Saturday.
A protester using the name Jeremy posted messages about drugs, dates with a girl called “Shazza” and xenophobia.
He claimed in an “official statement” that the rallies been cancelled, and posted tweets saying “whats wrong with muslims anyway I dun get it”
“I like vegemite on toast, it’s great in a toastie after a big night who gives a sh*t if it’s halal,” he added.
Vegemite is an iconic Australian slightly bitter sandwich spread made from brewer’s yeast. It is known as Marmite in Europe.