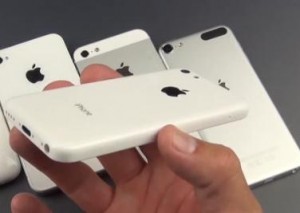 The countdown to one of the biggest product launches of the year has begun. Tomorrow, Apple will announce two new devices the iPhone5S or iPhone 6, and a budget iPhone that is being labelled the ‘iPhone mini’ or could even be called the iPhone C.
The website makes specific mention of the round circle around the home button and points out that it is the fingerprint recognition technology.
The frenzy has already started.
9to5 mac has published leaked images of an iPhone5S packaging. The images were originally uploaded by a Chinese blog Ctechcn.com.
There are reports of fans already queuing up in front of stores in the US in an effort to ensure that they are the first to buy the latest iPhone when it is released, although Apple is yet to announce when the device will go on sale.
Meanwhile, there has been almost near-unanimity among industry experts as to what Apple will announce tomorrow, September 10.
iOS7
To begin with, Apple for sure will announce its improvised OS the iOS7 that boasts a much cleaner and simpler design.
Several, or most of the icons have been redesigned and a beta version was showcased during the Worldwide Developers Conference in San Francisco.
Fans are expecting that the new OS will be ready for use in all three formats, iPhone, iPad and iPod.
New iOS 7 software will debut with a free iTunes Radio Service featuring more than 200 stations “and an incredible catalog of music from the iTunes Store,” Apple announced earlier this year.
The service will be integrated with Apple’s personal voice-assistant software program Siri, so users will be able to find out “who plays that song?”
The streaming radio service is part of what Apple chief Tim Cook branded the biggest change to iOS — Apple’s mobile operating system — since the introduction of the iPhone in 2007. -By Joseph George