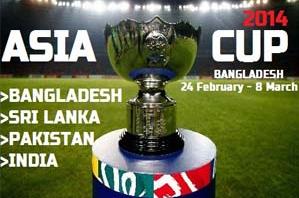 Asian Cricket Council today reconfirmed that Asia Cup cricket tournament will be held in Bangladesh as scheduled following security concern due to political instability.
The assurance came during a meeting of the ACC in Colombo today, Nizamuddin Chowdhury, the acting chief executive officer (CEO) of the Bangladesh Cricket Board (BCB), confirmed.
Scheduled to begin on February 25, the continental tournament is set to end on March 8.
India, Pakistan, Sri Lanka, Afghanistan and host Bangladesh will take part in the tournament.
The ACC decision may also clear they cloud over holding of the World Twenty20 in Bangladesh scheduled to from March 6 to April 16.
ACC today okayed the security plan a delegation of the BCB placed during the meeting in Colombo.
The tournament appeared to have run into trouble after Pakistan’s alleged refusal to travel to Bangladesh.
Though there were reports in the media on this, they did not formally communicated to ACC about their reservation over travelling to Bangladesh, Indian newspaper Times of India quoted a top ACC official as saying.
According to the newspaper, Pakistan’s opposition to Bangladesh as a venue stems from the reported hostilities towards the country there. Islamabad believes there is a strong anti-Pakistan sentiment in Bangladesh and the Pak foreign office is said to be opposed to its cricket team visiting Dhaka.
Times of India also wrote that the Board of Control for Cricket in India (BCCI) has doubts over hosting the event in India as it is unsure if the Indian government would allow for the smooth passage of the Pakistan team there.
That leaves Sri Lanka as the only option, the report said.
Asked about this possibility, BCB CEO Chowdhury said: “No discussion was held about any other venue during the meeting.”