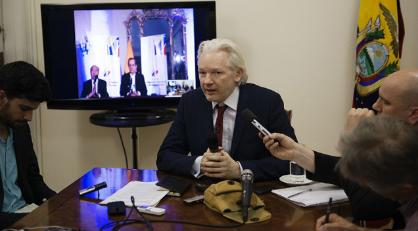 Julian Assange has been asked to star in a fashion show by British designer Ben Westwood at Ecuador’s London embassy, where the WikiLeaks founder is currently holed up in a bid to avoid extradition to Sweden.
Former photographer Westwood, son of legendary British fashion designer Vivienne Westwood, wants “good looking” Assange, 42, to appear with six other models as part of a fringe event during London Fashion Week in September.
“Julian is a popular hero,” the designer said in a statement given to AFP. “He has done a great deal to change public opinion.
“Through WikiLeaks people have been able to compare the facts with the official version of the story.
“He is a good-looking man and I hope he is going to model,” he added.
Mother Vivienne is also a keen supporter of Assange, and wore a T-shirt with the slogan “I am Julian Assange” when she paid him a visit at the embassy in 2012.
Other celebrities to visit Assange have included Lady Gaga and director Oliver Stone.
Hollywood A-lister George Clooney has been invited to the show, which is inspired by Clint Eastwood’s costume in the spaghetti western films, according to Westwood’s PR spokesman.
Assange first sought refuge at the embassy on June 19, 2012, to avoid extradition to Sweden, where he is under investigation on allegations of sexual assault.
Anti-rape campaigner Jill Saward criticized the decision to ask Assange to model as “distasteful.”
“It’s fashionable to get on board (with his cause),” she told the Times.
“I find it really distasteful. What they should be saying is go and clear your name and then we will support you, but to hold this event for a man who has cost this government millions of pounds is wrong.
“The message that’s going to come across is ‘We don’t care what he might have done’.”