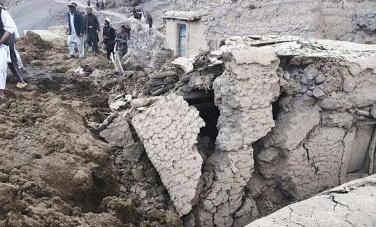 Afghan officials gave up hope on Saturday of finding any survivors from a landslide in the remote northeast, putting the death toll at more than 2,100, as the aid effort focused on the more than 4,000 people displaced.
Officials expressed concern the unstable hillside above the site of the disaster may cave in again, threatening the thousands of homeless and hundreds of rescue workers who have arrived in Badakhshan province, bordering Tajikistan.
“More then 2,100 people from 300 families are all dead,” Naweed Forotan, a spokesman for the Badakhshan provincial governor, told Reuters.
Villagers and a few dozen police, equipped with only basic digging tools, resumed their search when daylight broke but it soon became clear there was no hope of finding survivors buried in up to 100 meters of mud.
The United Nations mission in Afghanistan said the focus was on the more than 4,000 people displaced, either directly as a result of Friday’s landslide or as a precautionary measure from villages assessed to be at risk.
Their main needs were water, medical support, counselling support, food and emergency shelter, said Ari Gaitanis, a spokesman from the United Nations Assistance Mission in Afghanistan.