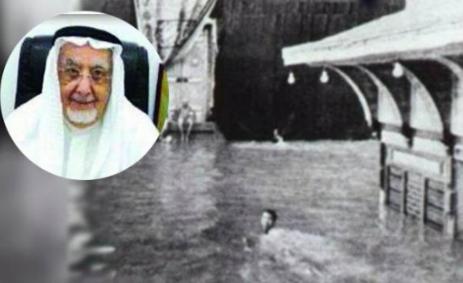 A Bahraini man famous for being captured by camera performing circumambulation around a flooded Holy Kaaba (tawaf) as a boy has died, aged 86.
News of the death of Sheikh Al-Awadi, who performed tawaf during the flooding of Makkah in 1941, went viral on social media.
The photo of a 12-year-old Al-Awadi almost submerged in water is one of the rare pictures of the flooding that struck the Grand Mosque and the holy city 74 years ago.
Al-Awadi died in Bahrain on Wednesday, according to the Bahrain News Agency. It was for the first time in the history of Islam’s holiest shrine that floodwater engulfed the Grand Mosque, rising to a height of six feet.
The water left behind a thick layer of mud on the flooring of the courtyards and chambers of the Grand Mosque. Earlier in 2013, taking part in a program aired by Kuwait’s Al-Rai television, Al-Awadi recalled the sweet memories of his tawaf during the flooding.
He said: “I was a student in Makkah at the time when the holy city witnessed torrential rain for nearly one week incessantly throughout day and night, resulting in flashfloods inundating all parts of the holy city.
“I saw several people, vehicles and animals washed away by flashfloods and several houses and shops inundated.” On the last day of the rain, he decided to go to the mosque along with brother Haneef and two friends, Muhammad Al-Tayyib from the Malian city of Timbuktu and Hashim Al-Bar from Aden, Yemen, to see what was going on.
“Our teacher Abdul Rauf from Tunis also accompanied us. “As children, we were delighted to see the flooded mataf. “Being a good swimmer, I was struck by the idea of performing tawaf and my brother and friends also joined me.”
When they started swimming, policemen tried to stop them in case they tried to steal the Black Stone on one of the corners of the Holy Kaaba or because they might be harmed.
“I tried to convince the police to allow me to complete tawaf while my friend Muhammad Al-Tayyib and another boy called Ali Thabit could not continue tawaf and they took shelter by climbing on the doorstep of the Holy Kaaba, waiting to be rescued.
“I had a mixed feeling of joy and fear while circumambulating the Holy Kaaba. “I experienced the joy of having the great opportunity to perform the ritual in a unique way and the fear that the policeman may shoot at me from his rifle for disobeying him, but later I found out that there were no bullets in his gun.”
Al-Awadi said when he asked the elderly people of Makkah at that time about the flooding, they said that they had never witnessed anything like that.
“Twenty years ago, when my son Abdul Majeed and his wife went to Makkah to perform Haj, he saw souvenirs with pictures of me doing tawaf that day.
“He also brought a book about Makkah and that also carried a photo of me performing tawaf.” –Saudi Gazette