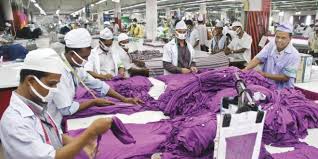 With a 7.38 percent year-on-year growth, Bangladesh has earned $24.39 billion in the first eight months of 2017-18 fiscal year.
According to data released by the Export Promotion Bureau on Thursday, the country could not fulfill the target of $24.4 billion export earnings in these eight months.
RMG sector contributed $20.25 billion to the total export earnings, beating the target of 3.21 percent growth. In that period, the export earnings in the sector grew 8.68 percent.
BGMEA President Siddiqur Rahman expressed his contentment with the performance by the sector.
Terming the growth very positive the BGMEA president said, “I hope it will grow by 10 percent in the rest of the financial year.”
The export target of current financial year is $37.5 billion.
During last fiscal year, the country exported goods worth over $34.65 billion with a growth of 3.39 percent against a target of $37 billion.