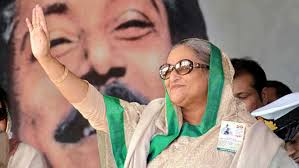 Prime Minister Sheikh Hasina, who is the president of the ruling Bangladesh Awami League (AL), officially launched her election campaign on Tuesday.
The general election in Bangladesh is scheduled to be held by the end of the year.
The prime minister offered a prayer at the holy shrine of Muslim saint Hazrat SHajjalal in Sylhet division, some 300 km from the capital Dhaka, and launched her election campaign there.
Meanwhile, the Bangladesh Nationalist Party (BNP), another major political stakeholder, is struggling with the political future of its chairperson Begum Khaleda Zia due to a graft case, which is scheduled to be decided in court on Feb. 8.
Political scientists, however, expect free, fair and inclusive polls to be held some time between Oct. 31 and Dec. 31, 2018.
“In the democratic process, an election is a must. To comply with the constitutional obligation, the AL will take part in the next general election,” said Khalid Mahmud Chowdhury, a parliamentarian and organizing secretary of the AL.
Chowdhury told Arab News: “The BNP chairperson’s trial in a graft case is a milestone in establishing the rule of law in a country like Bangladesh. If the BNP goes for vandalizing and anarchy in reaction to the verdict of the case, the people of the country will resist it. People do not condone an anarchic situation anymore.”
Although tension is building for BNP policymakers and its members over the graft case verdict for Zia, who has served as the country’s premier three times, the party feels that the verdict will not have any negative impact on it in the election.
Ruhul Kabir Rizvi, senior joint secretary general of the BNP, called the graft case against Zia “politically motivated” and claimed that the ruling party was bound to lose its popularity among voters for “harassing” its key political opponent.
Rizvi told Arab News that “if the court declares the verdict against the chairperson, we will protest it strongly in a democratic way.”
The BNP boycotted the general election in 2014, demanding the reintroduction of a caretaker government during the election period, which eventually led to more than half of the current Parliament members being elected uncontested. This year, the BNP has again demanded an “Election Period Assisting Government.”
“The BNP is a pro-election party, and to ensure a level-playing field during the election we are demanding this ‘Election Period Assisting Government.’ Still, we have 11 months in hand and I believe the prime minister of the country also wants an inclusive general election for the next Parliament,” said Rumin Farhana, a barrister and the assistant international affairs secretary of the BNP.
While the two major parties are concerned about the formation and nature of the election period government, the country’s leftist political wing has expressed a different concern.
“The election should be organized by the election commission of the country. The government during that period will only do the ‘routine work’ according to the constitution and the government will only facilitate the role of the election commission. Now, we just need to define this routine work,” said Ruhin Hossain Prince, the secretary of the Communist Party of Bangladesh. The left-wing parties are planning to form an eight-party political alliance to compete in the next parliamentary election, Prince said.
Professor Ataur Rahman, president of the Political Science Association, told Arab News: “So far in the race, the ruling party is in a better position. But in the end, we might experience a good election.”
“The ruling AL is implementing its development agenda, handling the Rohingya crisis successfully, taking the Islamic political parties into confidence, and addressing the demands of different professional groups.”
Rahman said that the AL may consider a “political concession” for its core opponent party in the form of a small Cabinet comprising all major parties representatives, headed by Prime Minister Sheikh Hasina, as a form of “election period government.”
“I think this is the possible best option for the ruling party and things are moving in that direction,” he said.
The government would prefer to hold an inclusive general election to form the next Parliament “otherwise the political situation may assume the worse shape,” Rahman said.