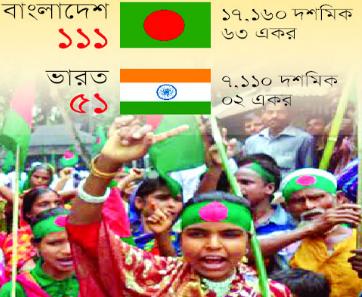 Bangladesh and India prepared Friday to swap tiny islands of land, ending one of the world’s most intractable border disputes that has kept thousands of people in stateless limbo for nearly 70 years.
Officials of two nations will hoist their respective national flags in 162 enclaves — 111 in Bangladesh and 51 in India — at one minute past midnight (1801 GMT Friday) to assume sovereignty over the territories following a historic border pact in June.
Following the flag hoisting, the enclaves — pockets of one country’s territory surrounded by the other — will cease to exist and more than 50,000 people who have been living there can now access citizenship benefits such as schools, power and healthcare that they have lacked since 1947.
In the final hours before the handover, villagers have been holding feasts and rehearsing their new national anthems.
Plans for more lavish festivities have been scaled back as India is currently observing a period of
national mourning for former president A. P. J. Kalam, who died earlier this week.
But there will be a ceremony on the stroke of midnight to light 68 candles to mark the years of stateless limbo since the end of British colonial rule of the whole of the sub-continent.
“This is the biggest celebration of my life. I can’t describe how I feel today,” said Parul Khatun, 35, a resident of the Indian enclave of Kot Bajni.
“I’ll be a Bangladeshi citizen who can enjoy all the benefits,” she said, recalling how she was kicked out of a Bangladeshi hospital when she was about to give birth as she lacked a national identification card.
The enclaves date back to ownership arrangements made centuries ago between local princes.
The parcels of land survived partition of the subcontinent in 1947 after British rule and Bangladesh’s 1971 war of independence with Pakistan.
Bangladesh endorsed a deal with India in 1974 in a bid to dissolve the pockets, but India only signed a final agreement in June when Prime Minister Narendra Modi visited Dhaka.
Officials of both nations this month conducted surveys, asking residents to choose a country.
The overwhelming majority of people living in Indian enclaves in Bangladesh opted for Bangladeshi citizenship.
But nearly 1,000 people on the Bangladesh side opted to keep their Indian nationalities, meaning they will leave their homes by November for India where they will be resettled by the state of West Bengal.
In India, all of the Bangladeshis living in the 51 Bangladesh enclaves decided to switch nationalities.