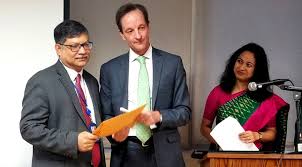 Bangladesh has met the criteria for graduation from the status of least developed country (LDC) for the first time, according to the Bangladesh mission at the UN.
The mission issued a statement in this regard, quoting the United Nations Committee for Development Policy (CDP) which completed its review of the LDC category and made the “announcement” on 15 March.
Roland Mollerus, chief of the CDP secretariat, handed over to permanent representative of Bangladesh, ambassador Masud Bin Momen an official letter conveying this announcement at an event organised at the Bangabandhu auditorium of Bangladesh mission on Friday.
The UN CDP determines the graduation of an LDC on the basis of its meeting at least two of three criteria — per capita gross national income (GNI), human asset index (HAI) and economic vulnerability index (EVI).
Bangladesh could meet all the three criteria in this year’s review by the CDP, said the mission’s news release.
It has set a goal to establish itself as a middle-income country by 2021, the permanent representative told the audience.
“We have aligned our national development plans with the SDGs. We are also committed to implement the SDGs. Our graduation aspiration has coincided with all these visions,” he added.
The diplomat hoped that Bangladesh will continue to receive similar support from its development and trading partners to make its graduation sustainable and also for the achievement of the 2030.
The dignitaries congratulated Bangladesh on its meeting the graduation criteria.
Among others, UN under secretary-general and UN office high representative for LDCs and SIDS Fekitamoeloa Katoa ‘Utoikamanu, chair of CDP expert group Jose Antonio Ocampo Gaviria, permanent representatives of Belgium to the UN Marc Pecsteen de Buytswerve; permanent representative of Turkey Feridun Hadi Sinirlioǧlu, assistant secretary general and director of UNDP regional bureau for Asia and the Pacific Haoliang Xu, and director of UNDP’s human development report office Selim Jahan joined this event.