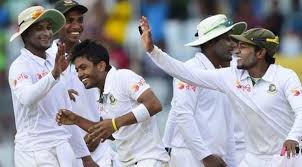 So, Test cricket is in danger, is it? Ha! Test cricket laughs in the face of danger. Twice in the space of 14 hours, the game’s world order has been thoroughly rattled, with two of the most memorable results in recent years. The first jolt came at Headingley, where West Indies upset England for their first victory in the country since 2000; the next day in Mirpur, Shakib Al Hasan bowled Bangladesh to a thrilling, historic maiden win over Australia.
Set 265 for victory, the Australians began the fourth morning in a strong position at 109 for 2. They continued to tighten their grip as David Warnerr eached his 19th Test hundred and his second in Asia, and compiled a 130-run partnership with Steven Smith, Australia’s highest century stand in the fourth innings in Asia. But on a pitch offering turn and variable bounce, Bangladesh were back once that stand was broken. Despite the best lower-order efforts of Pat Cummins, left unbeaten on 33, Bangladesh sealed the win by 20 runs.
Bangladesh have now won Tests against England, Sri Lanka and Australia within the past year. In the previous 16 years of their Test existence, they had defeated only Zimbabwe and a second-string West Indies outfit ravaged by a player strike. The significance of their successes over the past 12 months cannot be understated. It is no coincidence that the major contributors to this triumph were two of their most experienced players, Shakib and Tamim Iqbal.
Both men were playing their 50th Test; neither will ever forget the milestone. Tamim scored 71 in the first innings and 78 in the second; Shakib posted 84 on the first day and picked up five wickets in each innings, for the second 10-wicket Test of his career. There is no other player in history who has aggregated at least 80 runs and 10 wickets on two separate occasions in a Test: Shakib did so against Zimbabwe in Khulna in 2014, and has now done it again.
However, it was his fellow left-armer Taijul Islam who claimed the final wicket. Just as Cummins was threatening to spoil Bangladesh’s day – he plundered 15 off a Mehidy Hasan over, including two sixes, to slash the target from 36 to 21 – Taijul turned one back in to Josh Hazlewood and trapped him dead in front, umpire Nigel Llong having no hesitation in giving the lbw. Bangladesh’s prime minister, Sheikh Hasina Wazed, watched from the stands as the players rejoiced.
For Australia, the result might appear disastrous. In fact it was a natural continuation of their struggles against quality spin on turning pitches in Asia. They lost to Pakistan in the UAE in 2014, in Sri Lanka last year, and to India this year – albeit much more competitively. And if they lose the second Test in Chittagong, they will tumble to sixth on the ICC Test rankings for the first time since the system was introduced. They have much still to play for.
At the start of the day’s play, Australia were arguably ahead, with an established partnership between their captain and vice-captain, the team’s two best batsmen. And in defeat, the quality of Warner’s innings should not be forgotten. It was only the fourth time an Australian had scored a fourth-innings hundred in a Test match in Asia: Bob Simpson did so in Karachi in 1964, Mark Taylor in Bangalore in 1998, and Ricky Ponting in Fatullah in 2006.
Warner’s 112 featured 16 fours and one six, but when he was lbw trying to pull Shakib, Bangladesh regained their hope. And after Smith was caught-behind trying to cut Shakib four overs later for 37, Australia still needed 94, and Bangladesh six wickets. It was once again game-on.
Bangladesh’s catching had not always been perfectly sharp during this match, but a brilliant take from Soumya Sarkar at first slip ended Peter Handscomb’s innings on 15. Handscomb cut at Taijul and Soumya did well to get his hands to the flying ball, parrying it up so that he could then dive and complete the catch.
Matthew Wade never looked comfortable, and was lbw playing back to Shakib for 4, before Ashton Agar prodded a return catch to Taijul for 2. The lunch break seemed to come at a good time for Australia, who were rapidly fading and had a chance to regroup, but that wasn’t the case. Glenn Maxwell was out first ball after lunch when he was bowled attempting to cut Shakib off a ball that stayed low.
It was left to Cummins and Nathan Lyon to bail Australia out. They came together with 66 runs needed and chipped away at the target until only 37 were required. But when Lyon was caught on 12 gloving a sweep off Mehidy, Cummins decided he had to start attacking. His final partner, Hazlewood, was to be flying home with a side injury, and the best he could do was hang around for four overs until trapped by Taijul. And after the events of Headingley on Tuesday, the result in Mirpur on Wednesday only further confirmed that Test cricket is alive and thriving. –ESPN cricinfo