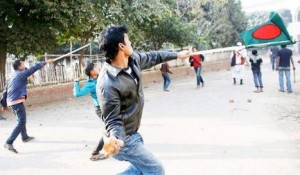 When they joined forces two decades ago, Bangladesh’s “Battling Begums” ousted a dictator and ushered in a new era of democracy. But now the toxic rivalry between Prime Minister Sheikh Hasina and opposition leader Khaleda Zia is threatening to bring the country to the brink once more.
As Bangladesh goes to the polls on Sunday, Hasina is guaranteed to be re-elected in what is effectively a one-party contest. But while voters prepare to cast their ballot, Zia is under de facto house arrest after her party decided to boycott an election it says would be rigged.
“Begum” is an honorific used for respected Muslim women. The run-up to Sunday’s election has been marked by bloody street clashes and caustic political vendettas, and the vote threatens to plunge the country even deeper into crisis.
The opposition and its allies are boycotting the vote, a move that undermines the legitimacy of the election and makes it unlikely that the polls will stem a wave of political violence that killed at least 275 people in 2013.