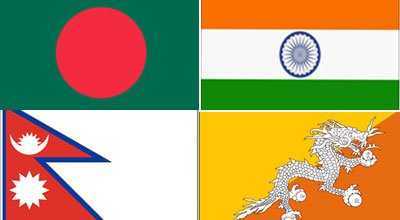 Bangladesh, Bhutan, India and Nepal signed the deal that would allow smooth transit of people, cargo and personal vehicles across borders of the South Asian neighboring countries.
The deal was inked in Thimpu, capital of Bhutan at around noon in Bangladesh time on Monday. Walid Foyez, senior communication officer to Road Transport and Bridges Ministry notified reporters about the event.
Road Transport and Bridges Minister Obaidul Quader was present in the signing ceremony in Thimpu on behalf of Bangaldesh.
Implementation of the treaty titled ‘Motor Vehicles Agreement for the Regulation of Passenger, Personal, and Cargo Vehicular Traffic with Bangladesh, Bhutan, India and Nepal (BBIN)’ will start on a limited scale next year.
Bhutanese Prime Minister Tshering Tobgay will flag off a vehicle that will run through Bhutan-Gowahati-Shilong-Sylhet-Benapole-Kolkata route to survey the road.
The other possible routes are: Thimphu- Phuentsholing-Jaigaon-Burimari-Mongla/Chittagong, Kathmandu-Kakarvita/Phulbari-Banglabandha-Mongla/Chittagong, Samdrup Jonhkar (Bhutan)-Guwahari-Shilong-Tamabil-Sylhet-Chittagong, Silchar-Sutarkandi-Paturia Ferryghat-Benapole/Petrapole-Kolkata, Silchar-Saturkandi-Chittagong Port and Agartola-Akhaura-Chittagong Port.
Bangladesh’s Road Transport and Bridges Minister Obaidul Quader said there would be a trial run of vehicles on all the possible routes in October. The Minister is now currently in Bhutan witnessing the deal proceedings. He mentioned that the transport secretaries of the four countries finalized the deal on Saturday.
The sub-regional move is an initiative parallel to the proposed SAARC Motor Vehicles Agreement and will be open to other neighbouring countries as well.
Meanwhile, Finance Minister AMA Muhith yesterday said the infrastructure of the route would be improved in about a year.
Routes, custom and immigration procedures along with fees and charges for vehicles are expected to be settled down by December this year.