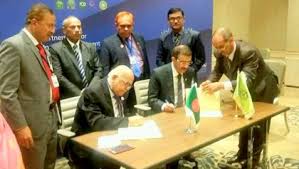 Bangladesh will receive 85.11 million Euro in loan from the Islamic Development Bank (IDB) for rural and peri-urban housing.
Bangladesh signed a loan agreement on Tuesday with this Jeddah-based lending agency on Tuesday.
Finance Minister AMA Muhith and President of IDB Bandar MH Hajjar signed the agreement on the sidelines of the 43rd meeting of the Islamic Development Bank Group in Tunis, according to a message received here today.
With the financial assistance from IDB, state-owned Bangladesh House Building Finance Corporation (BHBFC) will provide low-cost home financing to low-income rural people living outside the metropolis of Dhaka and Chattogram.
IDB will lend the money to Bangladesh House Building Finance Corporation (HBFC) through the Finance Ministry.
The loan would be disbursed under ‘Pallima Scheme’, a newly launched scheme of the corporation.
The main objectives of the project are to ensure access of the Rural and peri-urban people in Housing Finance and to save the agriculture lands from being eroded for housing purposes.
Under the project, loans would be distributed to construct some 7976 units both in rural areas, and peri-urban areas which will provide support to some 47,856 people.
According to BHBFC officials, loans would be distributed to construct 4,050 units in rural areas, 2,825 units in peri-urban areas and 1,101 units for non-resident Bangladeshis (NRBs).
The approval was given at the 320th meeting of the Board of Executive Directors of the Jeddah-based development bank.
Before signing the agreement, Muhith informed the IDB President of the current economic development trend of Bangladesh which has culminated to the country’s graduation from LDC to a developing one and said it has been possible due to the political stability restored by current regime and the prudent macroeconomic policies undertaken by the government led by Prime Minister Sheikh Hasina.
Muhith also informed the IDB President that Bangladesh has a dynamic private sector which is actually setting the trend and pace of country’s development.
The finance minister said the disbursements pace of IDB funded projects are relatively slow. Establishment of a gateway office might be a catalyst to resolve the issue, he added.
In response the IDB President said that the IDB is moving towards a massive decentralisation and the Country Gateway Offices and Regional Hubs will be delegated with more authority which is expected to accelerate the implementation activities.
In reply Muhith requested him to ensure the establishment of it by June 2018 so that it can be reflected in his budget speech for the upcoming fiscal year. The IDB President assured his all out support in this regard.
During the meeting, Muhith drew attention of the IDB President to the state sponsored nefarious atrocity committed by the Myanmar government against the Rohingya Muslims.
He said Bangladesh is at present hosting more than 1 million Rohingyas which has been exerting a heavy toll on the economy of the country.
Muhith sought support of the member countries and the Muslim world alongside the multilateral and UN agencies to ensure livelihood and safe repatriation of the Rohingyas.
The IDB President assured him of taking joint efforts to address the concern.