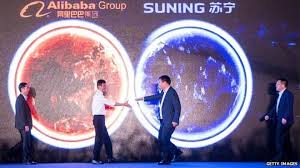 The fund owned by the billionaire George Soros has sold most of its shares in the Chinese online retail firm Alibaba.
Soros Funds Management now holds just 60,000 shares worth $4.88m, according to a regulatory filing.
That is down from $370m worth of shares at the end of March.
Alibaba listed in New York last September. Its shares hit record highs in November but since then have fallen by 37%.
Last week, the company disappointed analysts on Wall Street with its latest quarterly results, reporting its slowest quarterly revenue growth in three years, up 28% to $3.2bn.
Mr Soros’s firm also sold shares in the Chinese online search engine Baidu, but bought shares in Time Warner and Facebook.