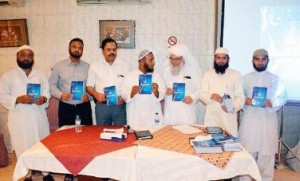 A video on “How to Perform Umrah” and two books on Ramadan and Haj by Mohammad Najeeb Qasmi were launched on Friday at an event held in Riyadh.
The books, entitled “Tohfa-e-Ramazanul Mubarak” (Ramadan Gift) and “Mukhtasar Haj-e-Mabroor” (Abridged Haj Guide), bring the total number of books authored by Qasmi to five.
The book launch began with a recitation of the Qur’an by Qari Shamshad and an Islamic nasheed (naat) by Maulana Abdur Rahman Umari. The event was presided over by Maulana Abdul Bari Qasmi.
The 29-minute video on how to perform Umrah has been prepared by Alamgir Khan; it provides a step-by-step guide on how to perform the rite in an attractive and easy to understand manner.
“Mukhtasar Haj-e-Mabroor” is the summarized version of the writer’s earlier book “Haj-e-Mabroor” of which three editions have been published in 2005, 2007 and 2011; this is also distributed to pilgrims free of cost.
“Tohfa-e-Ramazanul Mubarak” deals with the virtues and fiqh of fasting, Ramadan, sahoor, iftar, the night prayers, zakat, etekaf, the Night of Power, Sadaqat Al-Fitr, Eid and the six fasts of Shawwal.
Qasmi also launched an Islamic website in January (www.najeebqasmi.com) which has become very popular within the first six months of its launch. Qasmi’s books, articles and Umrah video — all written in the light of the Qur’an and Hadith — are all available at the site. The site also has an e-library where books can be downloaded for free.
Several prominent personalities of the South Asian expatriate community in Riyadh also attended the event. They included Khursheed Anwar, Musharaf Ali, Sayyed Akram, Aftab Nizami, Zafar Bari, Murshid Kamal, Ehsan Azem, Hafizurrahman Falahi, Nizam Sheik, Mohammad Salim, Inamul Haq Qasmi, Haroon Qasmi, Shabbir Nadwi and Ashraf Ali Qasmi.