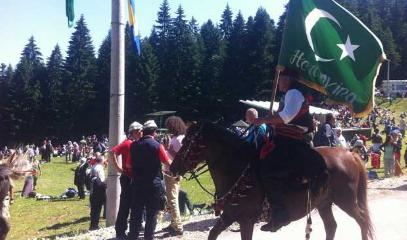 One of the most important symbols of Bosnian Muslims is the remembrance of the Ayvaz Dede memory where the celebrations of the 505th year have come to an end.
With the longest journey being the most important part of the festivities, many horseback riders have now reached Prusats having travelled from various cities in Bosnia. The celebrations have been attended by a large number of people, including attendees from Turkey.
The President of the Islamic Association of Bosnia and Herzegovina Hussain Kavazovich explained the importance of preserving tradition saying that “Our grandfathers and fathers were able to maintain this tradition in the most difficult of times”.
The Turkish Armed Forces Janissary band, recited a number of Islamic songs and there was also a display of whirling dervishes which attracted alot of attention from the crowd.
Who is Ayvaz Dede?
Ayvaz Dede is a 15th century dervish who moved to the Bosnian village of Prusats from Akhisar in western Anatolia.
Some believe Ayvaz Dede had come to Bosnia before the Ottoman conquest and he has been viewed as the pioneer of Islam. His legacy has always been a stronger part of Bosnia-Turkey relations.
According to other rumors, however, Ayvaz Dede had accompanied Ottoman troops led by Sultan Mehmet II in 1463. He was assigned to preach Islamic values and principles to the people in Bosnia. One day Ayvaz Dede became thirsty and started to search for a water source. Although he was able to find a source, it was impossible to bring the water to the nearest town because of a gigantic boulder standing on headwaters.
Participants in the event believe that Ayvaz Dede made prayers for 40 days and 40 nights to break the boulder which caused a drought affecting the region and then walked over a rocky area of boulders from which the water came. On the last day, while he was asleep next to the rock, in his dream he saw two goats knocking heads to the rock and it splintered. After woke up, he saw the rock divided into two. Following this miracle, there was a mass convert of Bosnians to Islam.