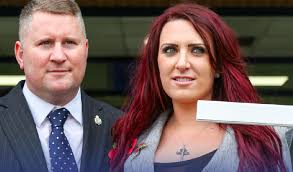 By Kevin Rawlinson: The leaders of the far-right group Britain First have been jailed for a series of hate crimes against Muslims.
The group’s leader, Paul Golding, was sentenced to 18 weeks in prison, while deputy, Jayda Fransen, was sentenced to 36 weeks on Wednesday. They had each been found guilty of religiously aggravated harassment at Folkestone magistrate’s court earlier the same day.
“These defendants were not merely exercising their right to free speech but were instead aiming religiously aggravated abuse at innocent members of the public,” the prosecutor told the court.
They were both arrested in May last year as part of an investigation into the distribution of leaflets and online videos posted during a trial at Canterbury crown court in the same month.
Three Muslim men and a teenager were convicted of rape and jailed as a result of those proceedings.
On Wednesday, the judge Justin Barron said Golding and Fransen’s words and actions “demonstrated hostility” towards Muslims and the Muslim faith.
“I have no doubt it was their joint intention to use the facts of the [Canterbury] case for their own political ends. It was a campaign to draw attention to the race, religion and immigrant background of the defendants.”
Both were convicted over an incident at a takeaway in Ramsgate, in Kent, during which Fransen banged on the windows and doors and screamed “paedophile” and “foreigner”. Two children were playing in the middle of the shop and Jamshed Khesrow, a friend of the owners, was inside.
The judge dismissed a second charge against the pair over an incident alleged to have taken place outside Canterbury crown court later that day.
Fransen was convicted on another count related to a visit to a house she wrongly believed to be the address of a defendant in the Canterbury trial, Sershah Muslimyar. Golding was cleared of uploading a video of that incident.
Fransen was convicted on a third count over an incident at the home of Tamin Rahmani, during which she shouted racist abuse through the front door while his pregnant partner was inside.
Jaswant Narwal, the chief crown prosecutor in the south-east, said: “The victims suffered the distress of the abuse followed by additional stress when the footage was uploaded to the internet.”
Britain First has been noted for its extreme white supremacist and anti-Muslim stances in the past, and Fransen gained particular notoriety when racially charged videos she published on Twitter were retweeted by Donald Trump.
At least one was later found to be fake and the incident caused a rift between Trump and Theresa May.
Source: theguardian.com