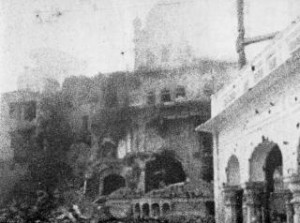 Foreign Secretary William Hague said on Tuesday an official investigation had shown Britain did advise India on planning a deadly attack against Sikh separatists in the Golden Temple at Amritsar in 1984, but said its advice had limited impact.
Prime Minister David Cameron Cameron ordered a review into the matter last month after newly released official papers suggested that Margaret Thatcher, then prime minister, had sent an officer from the elite SAS special air service to advise the Indians on the raid.
“The nature of the UK’s assistance was purely advisory, limited and provided to the Indian governmentat an early stage,” Hague told parliament.
“It had limited impact on the tragic events that unfolded at the temple three months later.”