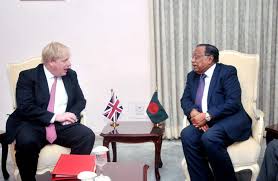 Britain is set to lift the ban imposed on Dhaka-London cargo flight. Visiting British Foreign Secretary Boris Johnson confirmed the matter on Friday evening. Through this decision, the root will be revived after two years.
Johnson said, “It’s all but done…Bangladesh government has made up huge effort to sort out the issue and we are pleased to note the progress.”
After a bilateral meeting with foreign minister of Bangladesh AH Mahmood Ali at State Guest House Padma, Johnson said, “We are on the verge of resumption of the direct Dhaka-London cargo flight.”
He praised the government’s efforts in dealing with one of the biggest crisis that Bangladesh has been facing following huge exodus of Myanmar nationals in Bangladesh.
“I want to congratulate Bangladesh, the government and the people on the way they have handled the one of the biggest humanitarian crisis we have seen in the last few decades,” he said.
Answering a question, he said Britain always wants a safe, secure and dignified repatriation of the Rohingya refugees in Myanmar.
Johnson also talked about the existing bilateral ties between Bangladesh and the UK; he said after the Brexit, Britain wants to tighten ties with Bangladesh in the field of trade and commerce along with other development sectors.
Replying the question how the British can help Bangladesh and the Rohingyas to end the crisis, he said, “This is a man-made tragedy that could be resolved with the right political will, tolerance and cooperation from all those involved…I will be talking to State Counselor Aung San Suu Kyi and other regional leaders about how we can work together to resolve this appalling crisis.”