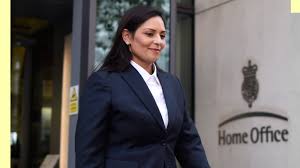 British interior minister Priti Patel will say on Tuesday the government will end free movement and introduce an Australian-style points-based immigration system once the country leaves the European Union.
In a speech at the Conservative Party’s annual conference, Patel will say her Brexit mission is “to end the free movement of people once and for all. Instead we will introduce an Australian-style points-based immigration system.”
“One that works in the best interests of Britain. One that attracts and welcomes the brightest and the best. One that supports brilliant scientists, the finest academics and leading people in their fields. And one that is under the control of the British Government,” she will say, according to an advanced copy of her speech.