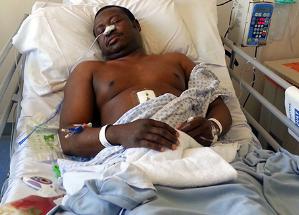 A 14-year-old boy was handed an 11-year sentence on Monday for stabbing his teacher in the stomach in a racially-motivated attack.
The teenager, who cannot be named due to legal restrictions, admitted causing grievous bodily harm with intent to Vincent Uzomah at a school in Bradford, northern England.
The boy used a racially-offensive term before knifing the 50-year-old teacher in a pre-planned attack in June before his classmates, then bragged about the attack on Facebook.
“What you have done is utterly shocking — deliberately, callously stabbing him,” judge Jonathan Durham Hall said at Bradford Crown Court.
He sentenced the boy to six years in custody and a further five years on license. The youth is likely to serve three years in detention.
Around 20 minutes after the attack, the boy posted a message on Facebook which said Uzomah was “getin funny so I stick the blade straight in his tummy.”
Some 69 people said they liked the post.
“It’s an appalling reflection on a small microcosm of our society that within minutes or hours after posting, 69 people ‘liked’. How sick,” said judge Hall.
The teenager yawned and folded his arms as Hall passed sentence.
Prosecutor Jonathan Sharp said Uzomah had suffered serious physical and psychological injuries and it was uncertain whether he will feel able to return to teaching.