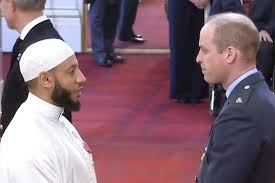 An Imam who restrained a crowd from attacking a terrorist who drove a van into worshippers at London’s Finsbury Park Mosque in 2017 was made an Officer of the Order of the British Empire (OBE) by the Duke of Cambridge on Thursday.
Imam Mohammed Mahmoud was awarded the OBE for his services to the community, having protected far-right attacker Darren Osborne immediately after he had driven a van into a packed pavement of Muslim worshippers in June 2017.
Prince William, whose title is the Duke of Cambridge, awarded the honor to Mahmoud at Buckingham Palace.
Speaking to British news channel ITV, he said he did not accept the term “hero,” but that he was “humbled” to receive the award.
“Heroes are those who go beyond the line of duty, whereas what I did on that night, with a group of other congregants from our mosque, was not extraordinary,” the Imam said.
“It was our duty to de-escalate the situation and to calm people down and to bring people to their senses and that thankfully is what happened.”
Despite Osborne’s actions killing 51-year-old Makram Ali and injuring nine other worshippers, Mahmoud protected the terrorist from a growing, angry crowd by standing over him until Metropolitan Police officers arrived.
His actions were widely praised, both in the UK and around the world.
Mahmoud’s award was among a record number for British Muslims in Queen Elizabeth’s 2019 New Year’s Honours list.
Following a trial in February 2018, Osborne was convicted of murder and attempted murder and was jailed for life, with a minimum term of 43 years.