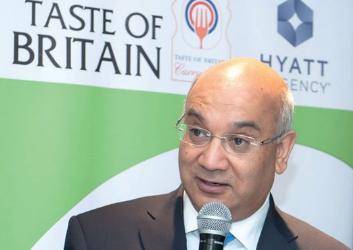 British MP Keith Vaz has decried his government’s decision to move visa-issuing powers from the UK High Commissions in Dhaka and Mumbai to New Delhi as being insulting to the people of Bangladesh.
He has demanded that the “short-sighted decision” be revoked and endorsed campaigns and e-petitions against the move.
“For the 300,000 people of Bangladeshi origin in the UK, this is an outrage,” the senior Labour parliamentarian told bdnews24.com in London.
He made the case for a review before Home Secretary Theresa May during a Home Affairs Select Committee session on Monday.
“I have no doubt that the downsizing of the Dhaka visa service will severely inconvenience the tens of thousands of people who apply there every year,” he told bdnews24.com.
Vaz tabled an Early Day Motion in the House of Commons to air his concerns and urged the government to review the decisions.
He also asked the British-Bangladeshi people to contact their MP and urge them to sign it.
The British High Commission in Dhaka on Sept 1 lost its authority to decide on visas as part of its government’s global move to reduce the number of visa deciding centres.
Applications submitted in Bangladesh are being assessed by the visa centre of British High Commission in New Delhi from Oct 1.
“There is, quite rightly, outrage at this short-sighted decision,” he told bdnews24.com.
People making an application would now have their documents sent to another country to be processed, without a proper interview or any interaction, he said.
People were rightly concerned that any issues with an application will take far longer to resolve, he added.
The Labour MP from Leicester East said, “For many, this decision is being perceived as the British government downsizing the importance of our historical relationship (with Bangladesh).
“We should be strengthening links with countries brimming with potential, like Bangladesh, but the government is taking steps backwards,” stressed Britain’s longest serving Asian-origin lawmaker.
Vaz said making such rash decision to ‘cut costs’ was foolish. The consequence will be the inconvenience of hundreds of thousands of people.
In the motion, Vaz said he endorsed the internet petition campaign launched by UK-based fortnightly Curry Life and weekly Asian Voice.
Eight British MPs have already supported the motion, according to the British Parliament website.
Meanwhile, demonstrations have been held in Sylhet against the British government’s decision.
Several British-Bangladeshis have also demanded that Prime Minister Sheikh Hasina discuss the issue with the United Kingdom.