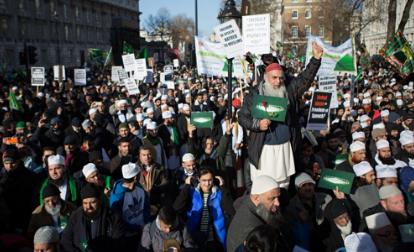 Thousands of British Muslims protested against cartoons of Mohammed in French satirical magazine Charlie Hebdo, in a demonstration near the office of Prime Minister David Cameron on Sunday.
The crowd marched to Downing Street holding signs reading “Charlie and the abuse factory,” “We love Prophet Muhammad more than our lives”, and “To insult is not freedom.”
Speakers addressed the protest and held communal prayers, before representatives delivered a petition signed by over 100,000 British Muslims to Cameron’s office.
The petition describes cartoons of Mohammed as “an affront to the norms of civilised society”.
After a deadly militant attack on Charlie Hebdo’s offices in Paris in January, Londoners had queued to buy the following memorial issue which featured a cartoon of the Prophet Mohammed on its front cover.
However most British media did not re-publish the cartoons, which are offensive to Muslims as depictions of the founder of Islam are forbidden.
“The peace-loving majority of people must become vociferous in promoting global civility and responsible debate,” said Shaykh Tauqir Ishaq, a spokesman for the Muslim Action Forum that organized the protest.
“At this time of heightened tension and emotion, it is crucial that both sides show restraint to prevent further incidents of this nature occurring.”
A smaller rival demonstration of far-right protesters gathered on the opposite side of the street near the prime minister’s office, waving Union Jack flags and holding a banner reading “Britain First: take our country back.”